5 funny characters for your nativity scene 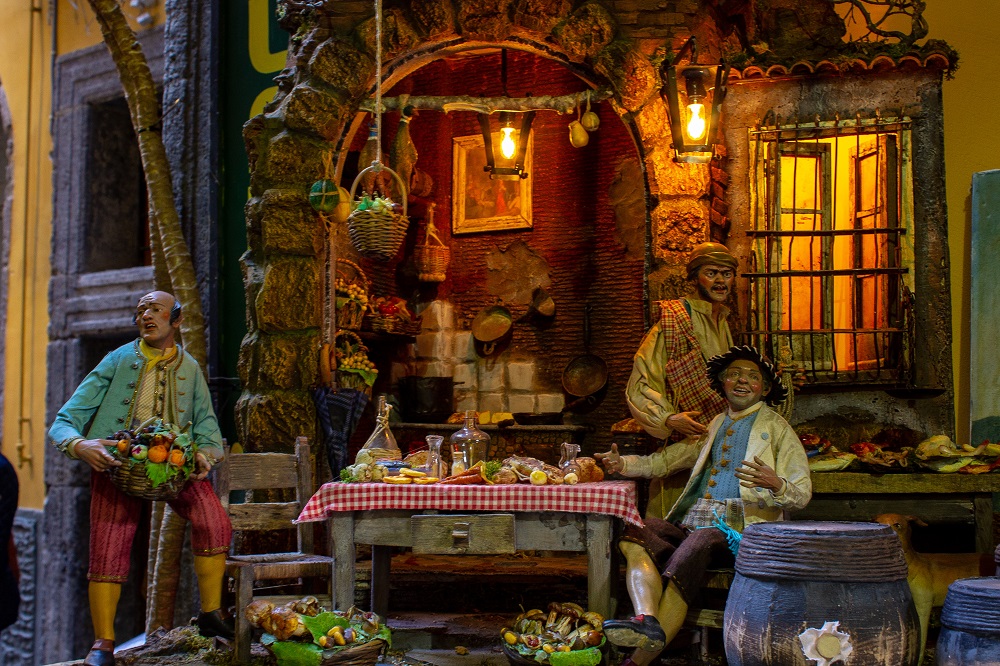 A funny nativity scene? Of course yes, thanks to the skill of the great masters of the Neapolitan nativity scene! Here are 5 characters for an animated nativity scene that will make you smile

It is not easy to choose the characters for your animated nativity scene. In addition to the canonical characters, which cannot be missing, the Holy Family, first of all, the shepherds, the ox and the donkey, the three wise men, and all those characters that contain more or less hidden symbols, those who love the traditional Nativity populate it every year with new appearances, enrich it with skits and glimpses that give it greater truthfulness, local colour, which make it more picturesque and personal.

But how far can we go to liven up our Nativity scene?

We have spoken extensively of the ancient Neapolitan nativity art, which is renewed every year in the alleys of the picturesque district of San Gregorio Armeno, which for centuries has been used to host the workshops of master craftsmen devoted to the creation of figurines for the Nativity scene. Once, where the church dedicated to San Gregorio Armeno now stands, there was the temple of the goddess Ceres, goddess of fertility and crops, to whom terracotta statuettes were offered as a gift, which was made in the artisan shops already present in the street at that time. These shops were possibly converted over time, transforming themselves to make statuettes for the Nativity scene, after the construction of the church and the spread of the cult of San Gregorio and Santa Patrizia. It is fascinating to think that even these two saints were brought in terracotta statuettes in offerings, as a sign of devotion and gratitude for the graces obtained.

10 characters that cannot be missing from your nativity
When St. Francis of Assisi had the idea of reproducing the birth of Jesus, his intention was to make an important and…

We certainly know that it was precisely here that between 1600 and 1700 the tradition of the Neapolitan Nativity scene statues experienced an impressive development and was codified according to the rules we still know today. Rules that are not rules, because one of the most fascinating aspects of this nativity scene tradition is its subversiveness, its surprising theatricality, in a mixing of the sacred and the profane, with the increasingly impressive introduction of characters linked to popular tradition, such as traders, beggars, buskers, as well as stalls, shops, taverns, in an increasingly strong and felt call to the life of Naples and its lively streets. Even the tendency to populate the Neapolitan nativity scene with even grotesque figures, men and women suffering from deformities, burdened by poverty, was fueled on the one hand by the love for this local colour, on the other by the desire to show humble, unfortunate, suffering people and therefore closer to Jesus.

The folkloristic detail trend has not left the alleys of San Gregorio Armeno even today. In addition to handing down the processing techniques and the secrets of their ancestors, the Neapolitan masters keep their subversive spirit intact, populating their nativity scenes not only with the innumerable traditional characters, each now invested with a fascinating and suggestive symbolic charge, but adding new characters every year, inspired by the world of politics, entertainment, current events, sport. So it will not be unusual to find on the stalls of San Gregorio Armeno, alongside the characters for animated nativity scenes such as shepherds and wives, footballers acclaimed by the fans, presenters and showgirls, even characters from successful television series.

These contaminations make us understand how the Neapolitan Nativity still lends itself today to the juxtaposition of traditional and modern characters, even bizarre ones. Our article arises from this point of view, in which we want to offer you five funny characters for the Nativity scene. Characters for nativity scenes in movement also made in this case by Neapolitan masters, all strictly by hand, in terracotta. Once made, the statues are covered with fabric, which is shaped and treated. The craftsmanship of each detail makes each setting and each figurine always different and unique.

Let’s go through them together.

Related Posts...
Original nativity scenes: the 5 strangest of the Holyart catalogue
Building the Nativity scene according to expert advice