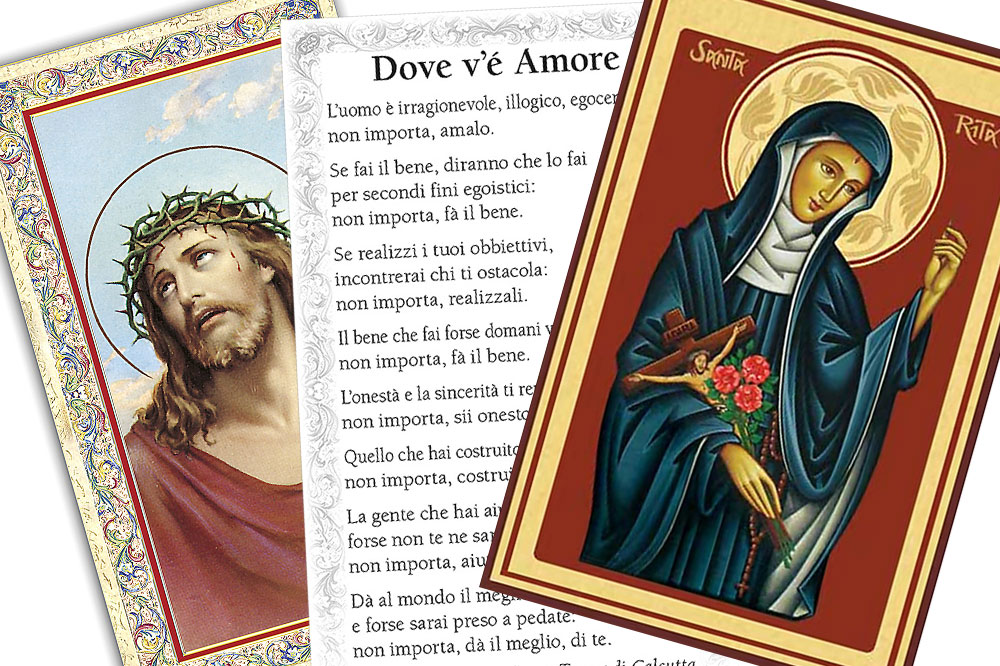 The word Paryer Card defines a small rectangular card, displaying on one side the printed or carved image of a saint or other sacred objects, and on the other a prayer or a hagiographic text related to the portrayed saint. There are Prayer Cards that celebrate a particular sacrament or holiday, such as the printed Prayer Cards that are distributed during the celebration of the First Holy Communion of children.

The origins of Prayer Cards

The Prayer Card has always played a fundamental role in spreading the Christian religion since its origins, around the XV century. We must remember that in the past centuries the majority of people could not read nor write. Education and access to books, codexes and sacred texts were reserved to elite of people, while the vast majority of the devotees could not consult them firsthand. This lack was compensated partly by cathechesis, sermons during masses, verbal evangelization, which orally passed epsiodes and passaged from the Bible and spread the philosophical and spiritual principles of Christianism.

Images were another powerful means of diffusion since the very beginning.

Since the Prayer Card is, as its name says, printed, we need to wait until the invention of printing to be able to talk about that. Actually, the road that leads us to this fascinating and particular devotion object is long, and includes many more famous and higher aspects of religious art.

Let’s begin by talking about the work of miniaturists, who cooperated with amanuensis in copying the ancient sacred texts and the miniature codexes. Their contribution was extremely artistic, since they were asked to embellish the texts with initial letters that included representations of Jesus, the Virgin Mary or the Saints.

While at the beginning these initial letters were just a simple decorative element, they gained their own value around the XV century. They became richer and more complex, turing into real scenes that told evangelic episodes, sometimes independent from the text they accompanied, with no need for written words.

Since these miniated codexes were used on a daily basis in liturgy, they were subject to tear and wear, and deteriorated till the point they were useless. The miniatures were then cut and inserted into other codexes, or more often, hanged inside the houses or brought along as an object of pocket devotion.

That is how the idea of having a sacred image that can be easily carried was born, so that anyone could carry one. And since it was not that easy to have a cut out saved from a miniature codex, the demand for miniatures specifically created for that aim began to grow. Artists and artisans worked hard to satisfy this new and more demanding market. From that to the next stage of evolution, that is, the printing press, is a short step. But not that short, actually.

The first kind of printed reproduction of Prayer cards dates back to the middle of the XV century, and coincides with the spread of the so called woodcut. Woodcut is a very ancient printing technique, used since the IV century in Egypt to decorate fabrics. An image was carved on a wooden board, which was later inked with a roller and then impressed on a piece of paper or parchment. The lines that created the image were carved on wood with sharp blades and burins. Wood was then carved in order to emboss the lines. Around the middle of the XVI century this type of work was joined by woodcut on copper sheets, carved in the same way.

These boards, called molds, were used on a large scale to print sacred images, especially connected to the story of Mary, Jesus and the Saints. Those images were then sold at a cheap price, so that they could be bought also by humbler families as objects of devotion. They were also used as superstitious objects to protect travel chests from thefts, or in workshops and stables. The first woodcuts were created in monasteries, but the production and sale of the carvings spread soon in villages and towns, and many workshops dedicated only to this kind of market started up. With time, the tecniques improved and colored woodcuts began to appear, which were printed at first, then hand-colored.

Even after other printing methods spread widely, sacred images woodcut was still practiced as a form of art in itself. Linoleum sheets or other less perishable materials are used today instead of wood to produce the Cards. Among the most ancient and precious woodcuts we can mention the Madonna of Bruxelles (1418) and the Madonna of the Fire, still hanged in the Duomo of Forlì (1429).

In Germany and in the Netherlands, around the XV century, the copper carving was also famous, as we were saying. In this case, the copper sheet was chiseled with a burin, a small chisel made of metal, and sharp blades. The pros of this choice were mostly connected to the perishability of wood, which made the molds unusable after just a few applications, while copper, being able to not absorb ink humidity and not deforming, could be used much longer.

Unlike woodcut, burin engraving on copper produced a cavity impression, where the ink penetrated instead of being embossed.

Another technique that spread at the time was etching, which was highly popular in Hamburg and especially in Antwerp, in the Flanders, artistic and business capital of the Spanish empire. It was the Order of Jesuits that promoted the diffusion of the sacred images made with this technique. Later, Paris became the first city in Europe in the production of sacred images of great beauty and refinement made with etching. The graphic workshops in Rue Saint-Jacques in the Latin Quarter also experimented more and more daring and accurate techniques. Also in this case, they worked on metal sheets (usually zinc or copper), which were corroded with acids. The sheet was cleaned, degreased with chemical processes, covered in an acid-resistant solution on which the selected image was hand-drawn. That way only the lines that needed to be impressed on paper were uncovered. In fact, when in the following stage the sheet was soaked in acid, the acid corroded the metal only where it had no protection. Having done that, the sheet was washed, dried, covered in greasy ink and placed in a chalcography press, where it impressed its cast on paper. This type of production allowed a higher attention to details and shades, therefore more refined and rich images. In particular, the engraver Jacques Caillot was able to give his sacred etchings such depth and realism that they are still famous today.

The Canivet technique spread also in monasteries during the Counter-Reformation age. The advocates of this movement considered keeping the nuns occupied with ordinary manual works a necessity. Embroidery and decoration of sacred vestments was highly encouraged, like trousseaus for private buyers, whose money contributed to the monastery sustenance.

Prayer Cards made with the technique of Canivet, also called Prayer Card products, were paper or parchment bases with an oval in the middle on which a sacred image was painted. Later, the oval was surrounded by a delicate engraving obtained with a canif, a very thin blade. The object was then completed with a cartouche and colors. The effect was like an ornamental crochet, it recalled achitectonic shapes, sacred images, flowers and animal decorations. Together with Canivets in the monastic environment, nuns and school girls began to enrich their works with fabrics, pearls, golden and silver threads, ribbons, and all that fantasy and creativity suggested to their minds. The results were collage-prayer cards, very elaborate and of great impact.

This kind of works spread soon also outside monasteries. In the XVI century many artisans began carving the engravings and put them on fabric bases. Besides being devotion objects, Prayer Cards made with the technique of Canivet were used also to celebrate anniversaries and to gladden events.

Around the end of 1700, Prayer Cards began to be used to remember the most precious moments of a devotee’s life, such as Christening, First Communion, Confirmation, Holy Matrimony and Death. Many publishing houses began dedicating themselves exclusively to this production on large scale, making thousands of Prayer Cards of any kind and for any occasion.

Given the impressive spread of sacred images in all Europe with woodcut, etching and the other techniques described above, the Church decided to intervene, imposing an official approval that had to be stamped on the back of the image itself. “Imprimatur” is the Latin word for the approval.

Lithography was invented in 1796. This is a printing technique that exploits the property of calcareous stones to absorb or reject grease when they are emulsified with acid-gummy solutions.

This technique depeloped into chromolithograph, obtained by using different calcareous stones soaked in colred inks, then fixed with resin and water mixed with Arabic gum. The press allowed pressing the stones on paper, and impressing the colored image.

Chromolithograph was proposed again in the Art Déco and Liberty fields, with the printing of Prayer Cards decorated with garlands, symbols, ribbons, flowers, and enriched with prayers and embossed images.

At the same time in Prague, the new European capital in the production of Prayer Cards, the techniques of embossing and stamp also spread; those techniques involved the application of golden or colored decorations, such as bright and vivid flower frames, on the Card. The whole card was then painted with a translucent paint that made the colors and details even more intense.

Inspired by Canivets, during the 30s also Lace or Crochet Prayer Cards reached the peak. In this case, too, they were made of an icon surrounded by an elaborate crochet. Thanks to the new printing techniques such as the Punch Press, it was possible to reproduce thousands of this type of Cards.

Recently, the phenomenon of Prayer Cards collector was born, which grew remarkably in just a few decades. This interest for Prayer Cards brought also a renewed attention in modern production, at least for what concerns the choice of the image to represent.

Related Posts...
The Novena to Saint Benedict
Padre Pio and his favorite prayer