Home » Saints and blessed » Archangels: who are they and what is their function?

Archangels: who are they and what is their function? 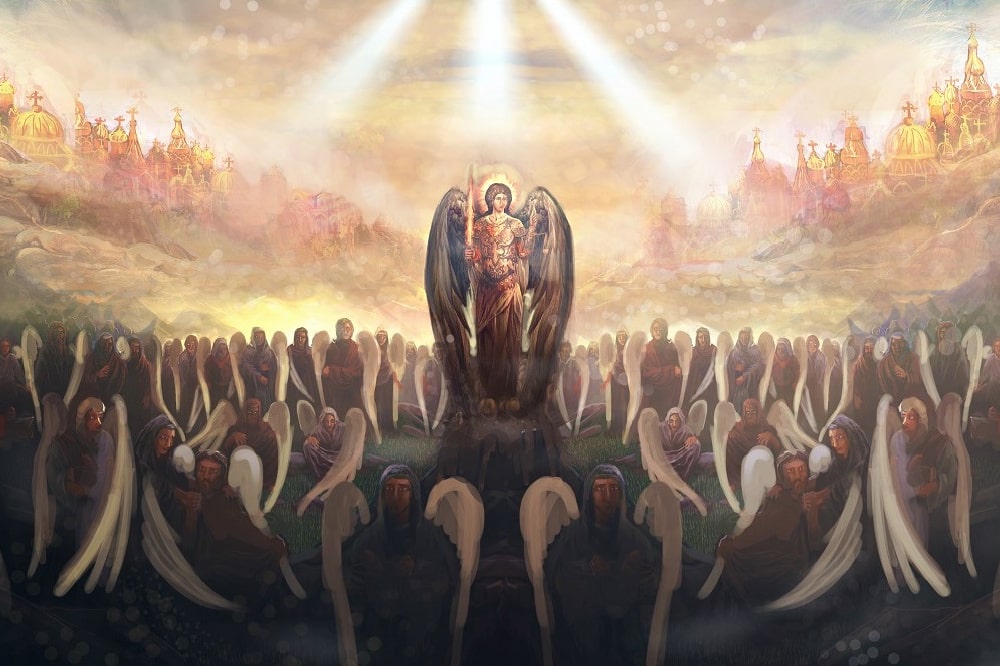 The Catholic Church recognises the existence of only three Archangels, or the three mentioned in the Scriptures: Michael (“Who is like God?”), Gabriel (“God’s Power”) and Raphael (“God’s Doctor”).

This clarification is needed, because one could object that in the texts of the past, other archangels have been mentioned, the same as the number of sects in the Book of Enoch: Uriel, Raphael, Raguel, Michael, Sariel, Phanuel and Gabriel. The system of seven archangels is in fact an ancient tradition of Judaic origin.

The Catholic Church, however, considered it necessary to stop such arbitrary and fanciful interpretations of texts that did not belong to the canonical Holy Scriptures. In fact, we remind you that all individual traditions must be examined and verified in accordance with what is stated in the Holy Canonical Scripture, which is the only true revelation.

Therefore, with regard to the Archangels, it was established in the Middle Ages that the worship and veneration of any of the other archangels mentioned by the Bible apart from Michele, Gabriele and Raphael was forbidden.  Even in the past, in the early Church, great efforts were made to prevent the cult of angels, which was influenced by heterodox practices and the pagan traditions of divine messengers, from leading to a form of idolatry.

In 1992, the decree Litteris Diei stated that “it is forbidden to teach and use notions about angels and archangels, their personal names and their particular functions, outside of what is directly reflected in the Holy Scriptures; consequently, every form of consecration to the angels, and any practices other than the official customs of worship are forbidden.”

Given this, who and what are the Archangels?

The existence of angels is a truth of the faith. Their presence in the Bible is incontrovertible testimony to this. These are incorporeal beings, who are spiritual, perfect, created by God at the dawn of time for the purpose of being his servants and messengers. They have always and forever contemplated the face of God, are ready to rush to his every command, as attentive listeners and executors of His Word.

They are therefore spirits that exist for Him and in Him, who are, however, also close to humans, through the faithfulness between the will of the Most High and his creatures.

Angels therefore live in the contemplation of God and act as His messengers.

Since ancient times, we have considered the fact that the angelic hosts are organised into a sort of Heavenly Court, in which the angels have different ranks and graces. The three Archangels occupy the highest domains of this angelic hierarchy. They too have tasks similar to those of the common angels, but their duties are even higher and more important. They are the task of contemplating God, day and night, glorifying Him incessantly by preserving and protecting His mystery. Their own names suggest their roles and their nature: all end with “El”, which signifies “God”.

The Sacred Scripture then, attributes a particular mission to each Archangel.

Raphael stands before the throne of God (Tb 12, 15, see Rev 8: 2), accompanied and protects Tobias in his perilous journey and healed his father from blindness and his future bride from the influence of evil.

In general, therefore, the task of the three Archangels, in addition to contemplation of God, is to communicate His Will to man in various ways, to be an inspiration for human beings, and the catalysts of divine grace for them.

Saint Michael appears in the Holy Scriptures, in particular in the Book of Daniel, in the Letters of the Apostle Saint Jude Thaddeus and in the Apocalypse.

His name derives from the Hebrew Mi-ka-El which means “who is like God?”

Popular iconography represents him as a warrior in armour wielding a sword, or intending to slay a dragon that symbolises the Devil, with a spear. In fact, this is the role played by Michael, that of the fighter fighting against rebel angels who are led by Lucifer. It was Michael who led the heavenly hosts in the war leading to the expulsion of rebellious angels from Paradise, and since then, he has continued to stand up as God’s defender against Evil and its deceits. The theatre for this new battle is no longer heaven, forbidden to Satan, but the souls of we humans, constantly targeted by the flattery of Evil, and instigated at every moment to rebel against God. The Devil tries to convince men that God is a tyrant, who limits their freedom and their own full realisation in the creation. The Archangel Michael is sent from heaven to protect men and guide them, to teach them to distinguish good from evil and truth from falsehood.

In the Apocalypse, where he revealed himself to John, he is described as a majestic being, vested with the task of examining the souls destined for the Last Judgment.

The Judger of souls, therefore, and protector, defender of the Church, and of the people of God.

Buy Now:
Saint Michael the Archangel statue in marble dust
St. Michael is represented with open wings and sword in hand, while he defeats the devil.

It is no coincidence that Castel S. Angelo, the fortress where the Pope takes refuge when in danger, is watched over by his statue, and travellers and pilgrims invoke his name and his protection against the hazards of the journey.

Some studies have sought to see in Archangel Michael, the influence of ancient myths linked to the legendary figure of a god-hero killer of monsters, like the Babylonian god Marduk, or of pagan gods who were engaged to act as mediators between heaven and earth, like the Greek god Hermes. The same festival dedicated to the Archangel, on 29 September, falls on this day as a legacy of the celebrations of the Autumn Equinox, a consecrated feast in Mithras, of a divinity linked to the Sun by the Persians and then the Romans.

His cult, within the Catholic Church, started in the East, but spread rapidly throughout Europe, especially following his appearance on the Gargano, in Puglia, when the Archangel appeared in San Lorenzo Maiorano in a cave that centuries later became a pilgrimage for popes, sovereigns and future saints. Near the cave rose the Basilica Sanctuary, which still today remains one of the most important and magnificent places of worship among those dedicated to the Archangel Michael.

In 2013, Pope Francis consecrated the Vatican City State to St. Joseph and St. Michael the Archangel, recognising once again his role as defender of the Faith and of the Church.

The Archangel Michael, the ‘celestial warrior’, is the protector of swordsmen and masters of arms. His skills as a judger of souls have also made him the patron of all trades that involve the use of assessments, such as traders, pharmacists, pastry chefs. He is also patron saint of the Police.

The cult of Archangel St. Michael
St. Michael the Archangel is one of the three archangels recognized by Christianity, and not just that…

Even the Archangel Gabriel, like Michael and Raphael, has a festival day- which is celebrated on September 29th.

His name derives from the Hebrew, and means “Power of God” or “God is Mighty”.

In the biblical tradition, he was considered to be one of the angels closest to the throne of God, to the point of being referred to as “the left hand of God”.

In the Bible, he is also presented as an angel of death, while for the Muslims he is one of the chief Messengers of God and the angel who revealed the Koran to Muhammad.

In the Christian tradition, Gabriel is particularly remembered as a messenger.

He revealed the future birth of John the Baptist to Zechariah, he appeared in a dream to Joseph to make him desist from repudiating Mary, because her pregnancy was the work of the Holy Spirit, and, naturally, because she was the bearer of a miraculous conception and of the birth of Jesus. In this case, more than in any other, he consecrated himself as being the messenger of God. It was Gabriel who appeared to Mary and told her that God had chosen her as the mother for His only Son. No imposition, no obligation. Only a request, addressed by one of the most powerful angels to a simple and humble girl. The role of Gabriel was therefore pivotal. He brings God’s message to us, making it understandable to us, helping us to listen with a pure heart and to accept the will of the Almighty.

Some interpretations have sought to see him as the angel who will blow the horn announcing the Day of Judgment, according to the Apocalypse of John.

Gabriel is considered to be the protector of those who work in communications, postmen, ambassadors, journalists and couriers.

Christian iconography depicts him as a young winged cherub, who often carries a lily in his hands, as a symbol of the Annunciation to Mary.

Raphael is the Archangel whose mission is to bring healing. In fact, his name derives from Hebrew and means “God’s Doctor”.

In the Bible, he is among the angels closest to the throne of God, who was chosen by Tobias to guide him on his journey to collect the payments left by his father. During the journey, Raphael, in human form, found a suitable bride for Tobias and restored the sight to the boy’s father.

Raphael was considered to be the patron of conjugal love, of young people, engaged couples, spouses, pharmacists, educators, travellers and refugees. Although not mentioned in the Qur’an, for Muslims, he is the angel in charge of sounding the horn that will signal the start of the Day of Judgement (according to other traditions, this was the task of Gabriel).

Often depicted with a jar containing medicaments and fishes, he is the patron of pharmacists, travellers and refugees.

His role as a healer, as “God’s Doctor” should always be interpreted as the will to heal the soul, to relieve it from its suffering and make it best disposed to welcome God. By restoring sight to the father of Tobias, Raphael opened his eyes to the Truth of the Almighty, just as, by driving out the demons that persecuted the girl who was promised to him, he made their marriage and their love possible. That is why he is also considered to be a protector of engaged couples and of conjugal love. Both are symbolic and meaningful healings, therefore. The power of the Archangel Raphael heals blindness, like the faith and love that priests show us and communicate to us every day opens our eyes to God. Equally, divine intervention, through its emissary, dissipates the clouds between men and women, makes them pure and suitable for union, in the name of a love blessed by God and by the Church.

Through St. Raphael, the healing and purifying power of God’s love descends on us, making us more worthy, and closer to God.

Buy Now:
Archangel Raphael resin statue 29 cm fish and staff
This statue depicts St. Raphael the Archangel together with his attributes linked to the book of Tobias.
Related Posts...
The cult of Mary Help of Christians
The Novena to Mary that loosens the knots