The halo: origins and meaning 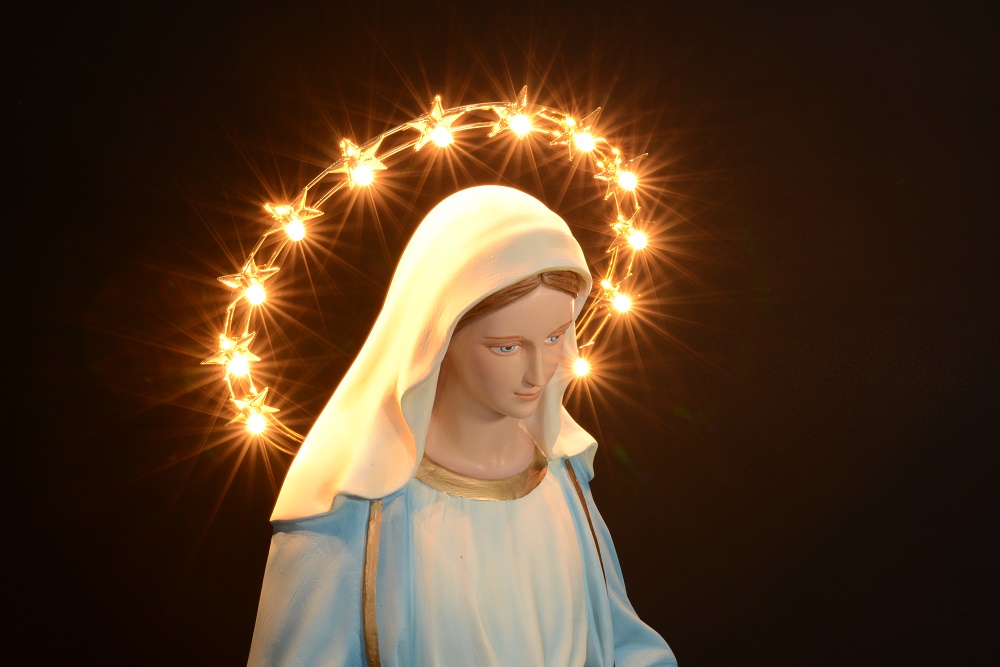 Symbol of light and grace given directly by God, the Saints halo expresses their bliss status and the divine majesty they are appointed with.

The saints halo, the nimbus, the vesica piscis (or almond). The irradiating light has been present in art illustrations since very ancient times. It has been used in sacred art as figurative feature since the beginning in many civilizations and cultures to state the divinity, power and regality of a character, and later, in a Christian setting, sanctity. The Egyptians, the Greeks and later the Romans, used a halo of light to underline the power of their gods, and later, even of their sovereigns.

What is a halo? It is a ring of shiny light enveloping the head or the whole figure of a person. The word ‘halo’ means golden, the round shape comes from the fact that the circle is a symbol of perfection, and therefore perfectly represents sanctity. In some cases we make a distinction between nimbus (a light that only envelopes the head), the halo (a light that radiates from the body) and the glory, or almond (combination of both, used only for Jesus and Mary to symbolize their divine nature).

In paintings, the halo went through a remarkable evolution, from big golden circles to halos of light rays, to thin golden rings barely visible to the eyes.

In statues, it was usually represented as a golden disc placed behind the head of the character.

The halo has then always been intended as a symbol of light and grace given directly by God. In pagan civilizations, the halo was expression of general power, divine but also human, and this trend went on even in the Christian era, when the halo was used not only to crown saints’ and angels’ heads, but also famous people’s heads. They were rich clients or intellectual people, at least until the 17th century, when Pope Urban III strictly forbid the representation of still living and not yet beatified men with halos on their heads.

The halo in the Christian iconography

Christians began using the halo in their representations (pictures, statues, mosaics, etc.) only between the II and the III century a.C. and in an extremely lay vision. At the beginning, it was only meant to underline the political importance of some characters, such as princes or emperors. As it was for the Romans, halos identified sovereigns, characters that had great powers and earthly dignity. Rays of light instead surrounded Jesus and the other religious figures. The firsts that brought the halo in a Christian setting were the Byzantine emperor Justinian and his wife Theodora: in the mosaics in the Cathedral of San Vitale in Ravenna, they were both represented with their heads surrounded by a golden disc.

After this first lay representation, from the IV century, Christians began using the halo to underline the spiritual importance of some figures, as symbol of bliss and heavenly glory. At the beginning the halo was a prerogative of Jesus, Mary and the angels; only later apostles and saints deserved to wear it, too.

The origins of the Saints halo

As we already saw, saints were soon given the honor of the halo in sacred art, right after Jesus and Mary, and with the due differences compared to them. The reasons behind this honor are clear. The saints are men and women that were touched in a special way by the divine grace, appointed with the love of God, made instruments of His will. The light they radiate is then of two kinds: on one side it comes from their head and body thanks to their merits, on the other side it is the reflection of the divine light that envelopes them and permeates them.

The halo on the saints’ heads in sacred images is usually represented as a circle painted in gold or blue. Originally, saints had laurel crowns like the Roman emperors and famous people, but later the laurel crown was replaced by a golden crown, and in the end, by a golden circle. The Holy Apostles were sometimes represented with a flame on their heads, symbol of their divine inspiration. At the same way, the Holy Evangelists could be represented as their symbolic animal with a flame surrounding their heads. Even Doctors of the Church and angels were sometimes crowned with the flame of the Divine inspiration.

The different shapes of a halo

There are precise rules that define the use of a halo in the sacred Christian art.

First of all, we need to make a distinction between the rounded halo, only for angels and saints, and the sunburst halo, placed on blessed people’s heads.

The Holy Spirit is not represented with any specific halo, as it is usually represented as light Itself, seven flames or a star ray, which symbolize the seven gifts.

In the rare occasions where God is represented as a vulnerable old man with the beard, he has a triangular halo on his head, symbol of the Trinity.

Mary’s halo is decorated with 12 stars or just one star, with one to seven flames.

From the VII century there was also a square halo, used when they needed to represent men or women that were about to become saints but they were not yet been canonized, or even still alive. The artist often represented the buyer of the work with this kind of halo.

During medieval age, artists kept representing rounded or oval halos, whose representations developed along with art itself, adapting to new styles and new perspective rules. During the Renaissance, the halo went a bit out of fashion, because artists began preferring a more human and carnal dimension of sacred images. We can still see it in some works as a very thin ring of light, almost invisible.

About colors, Christian iconography attributed red to martyrs, white to virgins and pure people, green to confessors, purple to penitents, gold or blue to saints and angels.

The devil or Jude Iscariot are sometimes represented with a black halo around their head.

Star crowns and halos for statues

When we wish to represent a saint or a sacred figure, especially Mary, with a sculpture or in general with a statue, we need to use a golden crown for statues, or more often a star crown.
Holyart catalog offers a wide variety of such artifacts, all handmade in Italy, available in all sizes. Upon request, it is possible to personalize most of them according to your tastes and needs.

Holyart Crowns for Mary, Saints halo, star crowns and sunburst halos are often made with filigree: brass threads painted in gold that create games with lights and shadows, particular shadings and contrasts that give the object more brightness and emphasis. Crowns are mostly made of golden brass, and imitate the ones represented in the most famous pictures of sacred art. For Virgin Mary statues, there are crowns with golden roses and stars. Many sunburst and halos are decorated with rhinestones, Swarovski crystals and golden details. Others are made of plexiglas, are equipped with light and led bulbs, which allow the statue to illuminate on its own, creating suggestive effects. Holyart catalog offers also tube-shaped halos with bulbs on the inside. A Holyart halo or star crown will give your statue a solemnity of other times.

Related Posts...
5 sacred objects that cannot miss in our homes
Footwear for clergy: how to walk comfortably on the path of faith