The various meanings of liturgical clothing 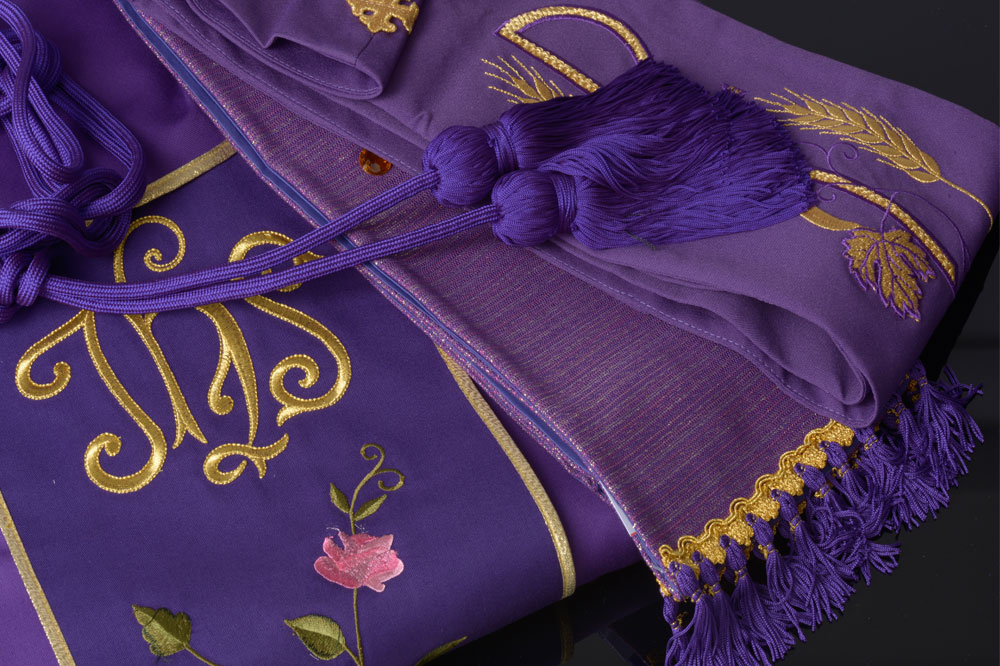 The term liturgical clothes, or  liturgical vestments, generally indicates the clothing used by priests of various ranks in the context of religious ceremonies and festivals.

These clothes differ in various characteristics and, in particular, vary in colour, depending on the time of year and the ceremonies or holidays in progress.

But liturgical clothes are much more than simple garments, more or less ornate, worn by ministers. The mere act of wearing them has a very strong symbolic value, for both the priest and those who, seeing him so dressed, identify him as a representative of God on earth.

This is why liturgical clothing has to be unique, and differentiated from any other type of garment that a priest wears at times outside of that festival. These garments in particular belong to a sacred domain, no more or less significant than the prayers and gestures that make up the liturgy, and the many rites that characterise religious ceremonies

Liturgical clothing must be beautiful, well-made, and conspicuous. They in fact derive from the clothing worn by Greek and Roman dignitaries, who belonged to the wealthiest classes, and who also demonstrated it through their clothing. The excellency of the first Christian priests was, of course, entirely spiritual, but nonetheless, their garments had to express this greatness, to make their role more comprehensible and immediate to the faithful.

Some ecclesiastical garments are also used outside of liturgical celebrations. Here, we’re referring to the cassock and the skullcap, the ferraiolo, a light silk cloak used by Vatican diplomats, the saturno, a hat whose shape reflects the planet Saturn, in fact.

In general, however, the function of the liturgical clothes it becomes fundamental precisely in the sphere of religious celebrations, in which they symbolize on the one hand the detachment from everyday life, from the ordinary, on the other the transcendence of the priest, who by wearing those particular garments ceases to be a common man, and assumes in a certain sense the functions and identity of Christ. The very form of priestly garments, their being often broad, flowing, emphasizes their function of rendering formless, ethereal the wearer, depriving the body of substance, bringing it closer to the spirit.

Amice: a rectangular or square cloth, which is fixed around the neck and at the waist by fabric ribbons. This is usually made of linen and is always white, and has to be worn underneath the priest’s habit. It is placed on the shoulders and tied at the waist.

Alb: a white gown with long sleeves that covers the entire body, down to the ankles. This is the basic garment for all officiators, not only of the celebrant priest, but all of those who participate in the liturgy. It is worn over the amice and fastened at the sides by a girdle.

Cincture: a cloth belt or girdle that is used to tightens the camice. Usually white, it can vary depending on the liturgical colour of the day.

Chasuble or Roman chasuble: this is the garment worn by the celebrant over the camice. It can be of various shapes and liturgical colours depending on the period and the occasion.

Liturgical surplice: a white surcoat with short, wide sleeves and a square neck, worn over the cassock. Unlike the camice that covers the whole body, this only reaches down to the knees. It is often decorated with embroidery.

Rochetto: a white surplus, similar to the cotta, but with more elaborate embroidery and often adorned by lace. It is worn by prelates. Made of linen, it has narrow long sleeves at the wrist and is internally lined in red or white. It is closed at the neck by a hook or a ribbon.

Dalmatic: a rich gown, used in Roman times, when it was embroidered with gold threads and adorned with pearls, enamels and precious filigrees. It expresses the solemnity of the celebrant’s role and is the richest and outermost garment he wears. It’s a long, knee-length tunic, with wide sleeves. The colour changes depending on the occasion and the day.

Mitre: headgear used by bishops, which in the past was often decorated with precious stones and gold, is almost pentagonal in shape, with two bands of fabric that fall over the shoulders.

Berretta or tricorno: a cube-shaped head-dress with three stiff wings and a bow on top.

Roman cope: a large cloak with a hint of a cap, floor-length, worn in place of a casula or pianeta for liturgical activities apart from Mass. When opened, it has a semi-circular shape. It is made in various liturgical colours and worn after the stole over the cotta or camice.

Tunic: similar to the dalmatic, it is worn by a deacon or sub-deacon, depending on how solemn the occasion is. It is made of precious fabrics, decorated with embroidery, and can be in various liturgical colours.

Pallium: a strip of white woolen cloth worn on the shoulders. Its shape and colour are supposed to represent the sheep worn around the neck when a shepherd carries them. It is reserved for the Pope and some bishops and archbishops.

Stole: a scarf of cloth, 200 to 250 centimetres long, decorated with three crosses, symbolising the sweet yoke of Jesus. Worn mostly by the bishop, it adopts various colours depending on the liturgical calendar.

Humeral veil: a piece of rectangular cloth with two ribbons at the centre to fix it, reflecting the embroidery and liturgical colours of the piviale.

The colours of liturgical clothes

Gold: the most solemn of colours, used all year round, even as a substitute for other liturgical colours

White: symbolises light and life, and because of this, is worn on the occasions of Baptism, at Christmas and at Easter.

Black: used above all for commemorations of the dead and for funerals.

Pink: used for the fourth Sunday of Lent and for the third Sunday of Advent.

Red: represents the colour of the blood of the Martyrs and the Holy Spirit. Used on Good Friday, Palm Sunday, Pentecost and festivals of the Holy Martyrs.

Green: the colour of renewal and life, worn every day.

Violet: symbolises hope and expectation. Used during Advent, Lent and in the liturgy of the dead.

The prayers that accompany clothing

When a priest dresses in liturgical clothes he is performing an actual ritual, which contributes to the process of ‘de-personalisation’, making the celebrant himself, as a common man, become, for the time of the liturgy, something other than himself, a sort of emanation of Christ.

The texts of these particular prayers are often found in the sacristy, even though most of them are no longer mandatory.

The dressing ceremony always begins with washing the hands, which pronounces a separation from all that is ordinary and profane, so as to approach a more spiritual and sacred dimension. The prayer that accompanies ablution of the hands is as follows:

Da, Domine, virtutem manibus meis ad abstergendam omnem maculam; ut sine pollutione mentis et corporis valeam tibi servire. (Give, Oh Lord, to my hands, the virtue that will erase all stains: so that I may serve you without a stain on my soul and body)

As we’ve already mentioned in relation to the list of liturgical garments, dressing proceeds gradually, by overlaying the various vestments according to rules that have been codified over the centuries.

Firstly, they put on the amice, the white linen cloth whose function is to cover the priest’s neck  if the gown does not. It is a sort of ‘protection’ from evil and temptation, a symbolic helmet. The prayer provided for putting on the amice is: Impone, Domine, capiti meo galeam salutis, ad expugnandos diabolicos incursus. (Impose, Lord, on my head, the helmet of salvation, to defeat attacks by the Devil).

Subsequently, the priest puts on the camice or alba, a symbol of purity and sanctity, an essential step for ascending to divine grace. On putting on the camice, the priest has to recite: Dealba me, Domine, et munda cor meum; ut, in sanguine Agni dealbatus, gaudiis perfruar sempiternis. (Purify me, Lord, and cleanse my heart, because purified in the Blood of the Lamb, I enjoy the eternal joy).

The gown is tightened by the waist girdle, which can be of various colours, depending on the liturgical time. The girdle symbolises the virtue of self-control, and the priest remembers it by quoting St. Paul: Praecinge me, Domine, cingulo puritatis, et exstingue in lumbis meis humorem libidinis; ut maneat in me virtus continentiae et castitatis. (Believe me, Lord, with the girdle of purity; drain from my body the sap of debauchery, so that the virtue of continence and chastity remain with me.).

The  sacerdotal stole distinguishes the celebrant more than any other liturgical vestment. Whilst wearing it the priest recites: Redde mihi, Domine, stolam immortalitatis, quam perdidi in praevaricatione primi parentis; et, quamvis indignus, ad tuum sacrum mysterium, merear tamen gaudium sempiternum. (Return to me, Oh Lord, the stole of immortality, which I lost because of the sins of the first father; and because I see my unworthiness of your sacred mystery, may I also achieve joy without end).

Finally the priest who is about to celebrate the Holy Mass wears the chasuble or pianeta. The prayer takes up the words of Jesus: Domine, qui dixisti: Iugum meum suave est, et onus meum leve: fac, ut istud portare sic valeam, quod consequar tuam gratiam. Amen. (O Lord, you said: My game is sweet and my burden is light: grant that I may wear this garment to achieve your grace. Amen).

Related Posts...
Thuribles in liturgical function
Liturgical candles: when and why they are important