Saint Monica: patron saint of mothers and example for women 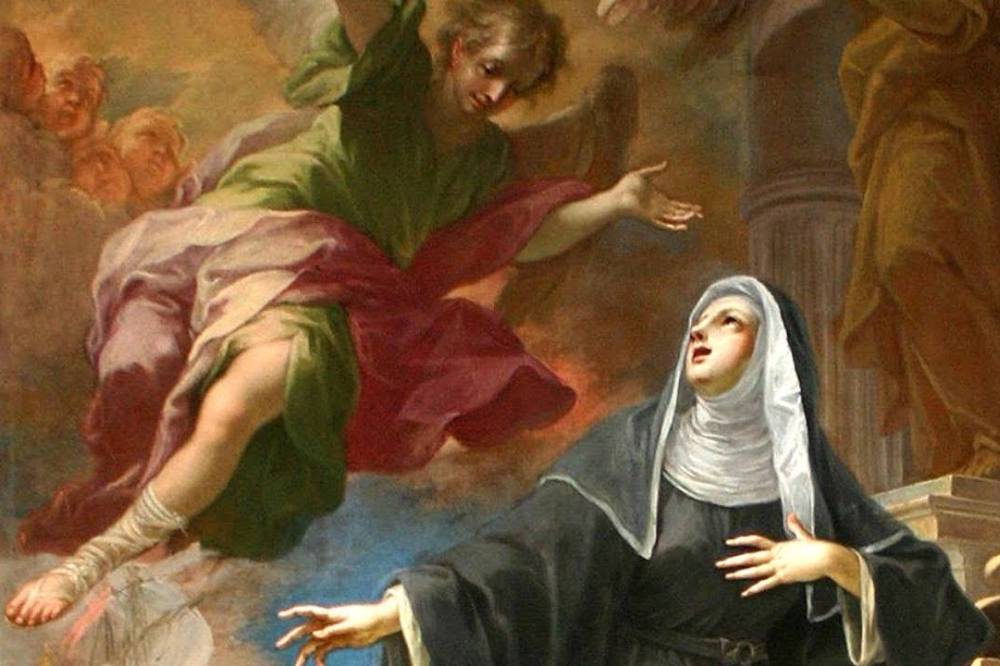 Saint Monica of Tagaste was a woman endowed with extraordinary strength of mind and unwavering faith. Let’s find out why she’s become a symbol for all mothers.

Saint Monica is the patron saint of married women, mothers and widows. In an era when the woman was always relegated to a subordinate role, forced to live in the shadow of her husband, and condemned to oblivion, without consideration for her actual gifts or abilities, this exceptional woman was able to sublimate the role that history and society had assigned her, becoming a point of reference and a symbol for women and mothers of every era.

Let’s imagine a son who, instead of thinking about his future, finding a serious job, cultivating constructive relationships with his neighbour, wastes his life among futile amusements, lingering in vice, corruption, in wrong and harmful companies.
Imagine a mother, a Christian woman, widowed early, with three children to look after and all the weight of responsibility on her shoulders.
It seems like a story similar to many others, one that we can hear told every day, or that perhaps we have even lived up close, in our family.

In the latter case, we can surely realise how much courage, how much strength it takes for a mother to immolate her own life, to spend every single moment of her existence solely and exclusively on the care and well-being of a child. And we think not only of the well-being of the body but also and above all of that of the spirit, of the soul, which especially in the youngest is constantly disturbed by thoughts and solicitations not always comprehensible to themselves.

From Eve to Mary: the figure of the Mother in the Bible
The mother, pillar of every family, beating heart and source of life for those who gravitate around her.

We have focused in the past on how the mother is often the pillar of the family, her beating heart, and the source of life for those who gravitate around her. Yet too often we take it for granted. In ancient culture, in almost all societies, being a wife and mother represented the highest aspiration and full realisation for a woman. Just as in many cases, it was inevitable to be submissive to one’s husband. In fact, even in the Sacred Scriptures, there is no lack of examples of women and mothers who knew how to oppose their husbands and society as a whole for the good of their children. Mary, the mother par excellence, collects within herself the sum of all the characteristics that should characterize a mother: tenderness, sacrifice, ability to cancel out of love, to endure every pain to stay close to her children. But she wasn’t the only one.

Saint Monica was an ethnic Berber woman, who belonged to a wealthy family and was devoted to the Christian faith. After marrying according to the will of the family, she had three children, who grew in the fervour of her faith. Faith was so ardent and unshakable that even her husband, a pagan, was infected with it, so much so that he converted to Christianity.

In a previous article, we talked about the ten Christian women who changed the church and the world. Here, among philosophers and thinkers, mystics and warriors, we also like to include a mother, like Saint Monica, who was able to imprint her entire earthly life only on the care of her children, and of one in particular: Saint Augustine of Hippo.

Yes, Saint Monica was the mother of Saint Augustine of Hippo, one of the greatest men of faith of all time. A philosopher and theologian, bishop and doctor of the Church, Saint Augustine wrote some of the most beautiful and intense pages in ecclesiastical literature and beyond. Some of those pages were inspired by his mother, Santa Monica. Unbelievable to say, it is him we were talking about just now, mentioning the unruly son and the mother who worked hard to lead him on the right path! In fact, this exceptional man of God came to the Faith after a long internal labour and a youth dedicated to excesses, licentiousness, vice and even crime.

Yet, from his own words we learn how: “From my tenderest childhood, I had sucked with my mother’s milk the name of my Savior, Your Son; I kept it in the recesses of my heart; and all who came to me without that Divine Name, though it might be elegant, well-written, and even full of truth, did not take me away.” (Confessions, I, IV).

Saint Monica never prevented her son Augustine from living his own life. Although she was opposed to some of his choices, the saint could leave him free to choose and to make mistakes. Moreover, God himself wanted to benefit his most complex creature, man, from free will, that is, the possibility of independently evaluating his own action, without any external force or superior entity holding the rows of his destiny. How could Saint Monica have acted differently with her eldest son?

Free will: what it is, what it means
What is free will? What implications does it have for a man’s life in general, and for the Christian’s in particular?

But she followed him, in his wanderings in the Mediterranean basin, without letting herself be discouraged by his discrepancies or lies. He went to great lengths to get rid of this loving and wise presence, even abandoning it at the port of Carthage to embark for Italy.
Santa Monica didn’t let it beat her. He followed his rebellious son to Milan and finally, thanks to his advice and love, Augustine converted and received catechesis from St.Ambrose.

These spiritual dialogues between mother and son characterised the last part of Santa Monica’s life. From that period of intense spiritual exchange we have the words of Saint Augustine, in the ninth chapter of the Confessions: “My son, as far as I am concerned, there is nothing that attracts me in this life. I don’t even know what he’s doing down here, and why he’s still here. There was only one thing that made me want to live a little longer: to see you as a Christian before I died. God has granted me more and better: to see you despise earthly joys and serve him alone. What am I still doing here?”
Prophetic words, those of Santa Monica: as she was about to embark to return to Africa, the woman contracted malaria and died, just fifty-six years old, on 27 August 387 AD.

Among the many things written about his mother, to whom he remained indebted for his entire life, Saint Augustine said: “I owe her all that I am” (La feltà, 1,6) and again, in the Confessions: “She begot me both with her flesh so that I might come to the light of time, and with her heart so that I might be born in the light of eternity.” 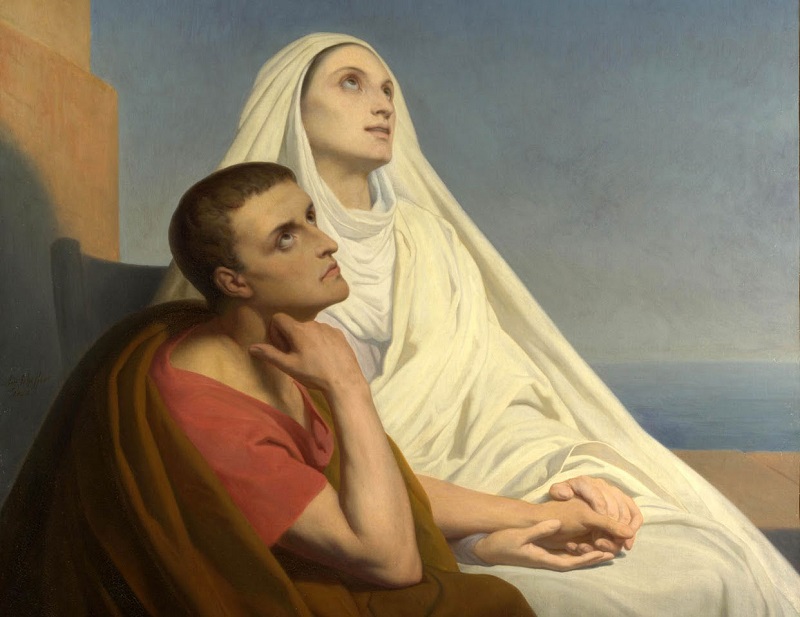 There is a prayer dedicated to Saint Monica, which can be considered the prayer of all mothers who put the good of their children before everything else and live for them.

Lord, who takes care of each one of you
as if he were the only one and of all as of each one, I
am here
before Tecol, a heart full of trepidation and

hope. That
in the eternity of Your mercy you
accept to indebted
yourself with the debt of forgiveness,
turn Your gaze of indulgent attention
towards my son who struggles on his journey of Faith.

One day you led to Faith and holiness
a man who had wandered far from You,
that son of so many tears who was Augustine,
won by the tenacious and confident prayer
of his mother Monica.

It is to her, Lord, to Saint Monica
and to her intercession,
that I now entrust my sorrow and my prayer,
that his tears of faith also
obtain for my son the
return to a living and active faith,
so that the ideal Christian man may be
realised in him who with effort,
but with all the commitment of my poor testimony,
I have tried to build the
years of his education.

Related Posts...
The Assumption of Mary and the most characteristic celebrations
Religious jewellery: the new Holyart product line