Home » Religion » The Botafumeiro, the largest thurible in the world

The Botafumeiro, the largest thurible in the world 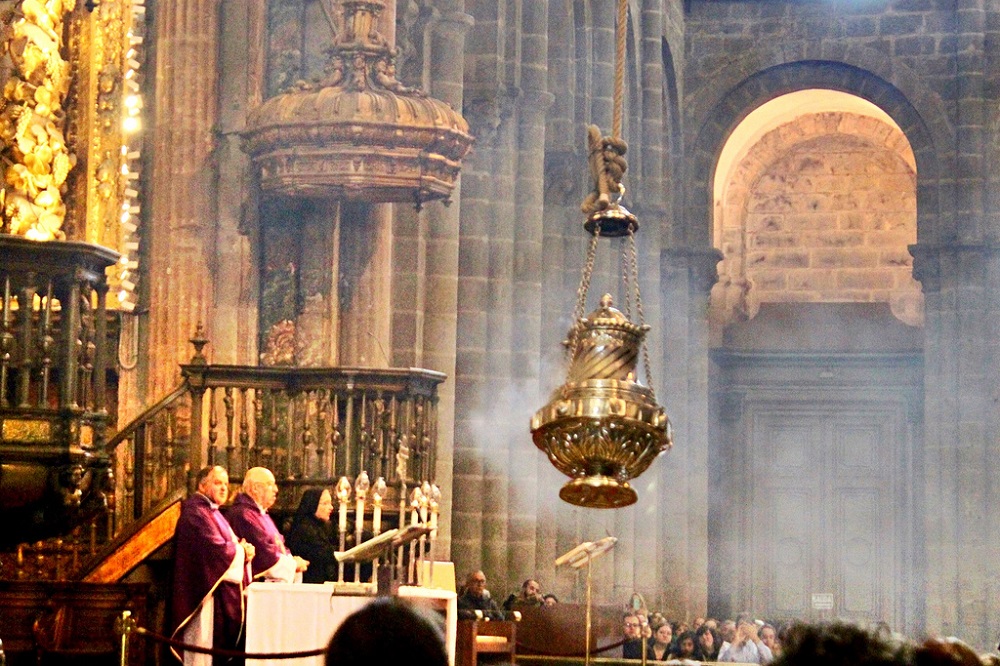 The Botafumeiro in the Santiago de Compostela Cathedral is the largest church thurible in the world, loved by all pilgrims that undertake the Camino pilgrimage

The Botafumeiro. A funny, exotic name that evokes suggestions from a distant past, memories of an ancient history told at the crossing of many streets by countless men speaking different languages, but in the end telling the same things for centuries. What is it? It is the largest thurible in the world, stored in one of the places of cult that characterized Western Christian history since medieval age: the Santiago de Compostela Cathedral. Let’s find out something more about this object, about its history, and of course about the unbelievable place where it is kept, and where many pilgrims can admire its dizzying swaying on their heads still today.

The Santiago de Compostela Cathedral is one of the most famous places of pilgrimage in the world. It is located in the namesake city of the autonomous community of Galicia in Spain, a place that was considered one of the most important centers of Christianity since Medieval age. Ancient legends say that this was the place where the souls of the deceased gathered to undertake the path towards the sea, following the run of the sun at sunset. Besides these fascinating suggestions, Santiago de Compostela owes its fame to its cathedral, mother church of the archdioceses of Santiago de Compostela, and one of the most important shrines of the world. Why so much excellence? In its crypt, the Cathedral of Santiago de Compostela stores the mortal remains of the apostle James of Zebedee, also known as Saint James the Great patron of Spain, and adored in this country as Santiago (from Saint Jacobi, in Spanish Sant-Yago). In fact, the Golden Legend says the Saint James the Great, after Jesus’ death, embraced his evangelization work through France and Spain, up to Galicia. The word Compostela instead, comes from Campus Stellae (field of the star, due to the strange lights resembling stars seen by the hermit Pelagius on mount Liberon, which allowed the discovery of Saint James tomb), or maybe from Campos Tellum (field of burial), referring to the burial place of the Saint.

The tomb of the Saint was discovered in the IX century, and the works to build the majestic Cathedral of Santiago de Compostela began in 1075. The Cathedral of Santiago developed in time, enriched with many relics and became the final stage of one of the most famous and diffused pilgrimages since medieval age: the Way of Saint James of Compostela.

The way of Saint James of Compostela

It is an 800km long path, and should be completed within one month. The Way crosses France and Spain, even if there is an alternative path called Portuguese Way, which goes from Lisbon to Santiago. The pilgrims that wanted to reach Santiago de Compostela had many options. They were all collected in the Codex calixtinus (the Liber Santi Jacobi) and are popular still today:

The Via Francigena was the one chosen by those coming from Italy. At some point, once the pilgrims had crossed the pass of Mont Cenis or the Col of Montgenèvre, it merged with the Arles way (via Tolosana), which connected Arles and Toulouse, and was used by the pilgrims coming from the South of Germany. One other way was Le Puy route, from Lyon and Le Puy-en-Velay, which crosses the Pyrenees at Roncesvalles; then the Vézelay route, the Turonensis route, through the city of Tours, where pilgrims from England, the Netherlands and Northern Germany gathered.

The pilgrims coming from Atlantic harbors of Northern Europe could choose the ancient way of the Ruta de la Costa, the first ever to be travelled, starting from the harbors on the Northern coast of Spain where ships docked.

The crossing of the Pyrenees was, and is today, through Roncesvalles towards Estella (Camino francés, French Way, the most used still today), or through Somport (Camino Aragonés, Aragonese Way). The Camino aragonés touches Jaca, Sangüesa, Enériz; the Camino francés touches Pamplona, Logroño, Burgos and León. The two ways join in Puente de la Reina, where the Monument to the Pilgrim with this engraved writing stands: “Y desde aquí todos los Caminos a Santiago se hacen uno solo”, From here all paths to Santiago become one.

One of the most significant places of the Way is the Cruz de Hierro (iron cross), on the Montes de Leon, close to Foncebadón, 250 km far from Santiago de Compostela. In ancient times there was a pagan temple dedicated to Hermes, protector of travelers. It is a place full of symbolic strength, where an ancient and suggestive ritual is celebrated: each pilgrim, when leaving for the Way, chooses a stone as big as he believes appropriate compared to the sins he wants to receive grace for. The pilgrim carries stone up to the Cruz de Hierro, and will add it the other stones at the feet of the cross. Some pilgrims choose to leave personal effects as well.

There are many pilgrims prayers written throughout the centuries and that are now part of the tradition of the Way of Saint James. There are for any stage of the journey, from the start point to the arrival, in front of the tomb of Saint James. Famous pilgrims left a few, such as the one John Paul II recited in front of the Saint’s tomb in August 1989, while visiting Santiago de Compostela for the International Youth Day. In particular, we want to quote the prayer affixed in the Romanesque church of S. Maria La Real in O Cebreiro: the pilgrim prayer. We will only report the first strophe:

Although I may have travelled all the roads,
crossed mountains and valleys from East to West,
if I have not discovered the freedom to be myself,
I have arrived nowhere.

Let’s get to the Botafumeiro, or turibulum magnum, the real main character of our article. It is one of the most famous and important symbols of the Cathedral, well known all over the world. It is used in case of solemn masses and particular celebrations during the Holy Year.

It is a church censer, or thurible (from Latin thuribulum, whose stem thur means incense), as we already mentioned, that is, a big container (in this case, it is really huge!) where incense in grains is burned. The thurible is a recurring element in many ancient and modern religions. “Gods love scents”, as the ancient Egyptians used to say. For millennia people believed that the smokes coming from incense were particularly appreciated by gods during religious celebrations. Not just that, incense was also used to purify air, to set it free from spiritual negativities. Thuribles were used in different ways during religious celebrations of any age and culture, to scent, heal, purify and protect. In Christian Catholic liturgy, incense is burned to symbolize prayer and adoration towards God. Moreover, it is also a gift, an honor we give Him, some sort of sacrifice reserved to Someone really important and unique.

Today it is very popular to burn incense at home as well. Once again, if we consider the pleasure of its scent on one side, this gesture also hides a will to purify the ambient not only from bad smells, but also from evil presences and negative energies. The phenomenon of home incense burners is very popular, and not just those who have a strong religious belief practice it.

But let’s get back to our turibulum magnum.

The Botafumeiro is made of brass and silver, is 1.60 meters tall and weighs about 50 kg; when it is filled with coal and incense, it weighs more than 100 kg. When it is used, it is suspended at a height of 20 meters. To operate it, eight men are needed, the so-called “tiraboleiros”, who give it a pendular motion (columpiar) using a complex system of ropes and pulleys, pushing it almost up to the ceiling of the cathedral at a speed of about 70 km/h. A magnificent, almost hypnotic, display, which makes the celebrations held inside the cathedral of Santiago de Compostela even more suggestive.

Actually, the Botafumeiro had its history, and its use changed throughout time. At the beginning, according to the Codex Calixtinus, it was not exactly a censer used during ceremonies, but a big container used to burn incense and cover the smell of pilgrims looking for shelter inside the cathedral at night.

In the XVI century King Luis XI of France, nicknamed l’universelle aragne, “the universal spider”, donated money to the cathedral, and allowed the construction of the thurible in 1554. At the time, it was just a silver pot. Another tradition says that the King himself donated the pot to the cathedral. Anyway, Napoleon armies later stole it.

The current Botafumeiro dates back to 1851, and was made in brass then covered in silver.

The Botafumeiro began swaying over the devotees’ heads gathered in the Cathedral of Santiago soon, and throughout the centuries inevitable accidents occurred, when the big censer disconnected from its ropes, with often dramatic consequences. The most famous one happened on July 25th 1499, in the presence of Infanta Catalina (future Catherine of Aragon), when the thurible disconnected from its hook and flew against the door of the Praterías square, hitting it violently, and in 1622, when the rope holding it broke and it fell on the floor. Also in the XX century a curious pilgrim, who got too close, wound up with fractured ribs and nose.

When is the Botafumeiro used?

Until January 1st 2017, it was regularly used during the Mass dedicated to the pilgrims on Friday night at 19.30. This has currently been revoked up until further notice. Actually, sending an email with a substantial offer (at least 300 Euro) to the Office of the Pilgrim, people can request the activation of the Botafumeiro when visiting Santiago de Compostela.

To see the Botafumeiro in action, people need to go to the Cathedral in the days dedicated to the most official celebrations:

-……the Assumption of Mary into Heaven (August 15th);

-….. Commemoration of the translation of the relics of the Saint Apostle (December 30th).

Related Posts...
The day the Holy Sacrament landed on space
Why lighting up a candle in church?