Home » What’s the Future of Religion?

Religion has been around for almost as long as humans. Since the days in which we’d roam the forest, hunting animals and foraging plants, we believed. Of course, we haven’t always believed in the same deities, figureheads or scholars, but we’ve always had an inclination towards belief – belief in something.

And yet, despite spending many thousands of years sculpting icons out of wood and bowing our heads in prayer, modern society appears more and more secular by the day. In a world so clearly divided by religion, what does the future hold for age-old schools of faith in the contemporary world?

A growing number of people worldwide claim that they believe life to end at death, with no God, heaven or divine plan. According to Phil Zuckerman, professor of sociology and secular studies at Pitzer College in California,

“There’s absolutely more atheists around today than ever before, both in sheer numbers and as a percentage of humanity.”

What’s more, a Gallup international survey reported that, of over 50,000 people in 57 different countries, the number of people that declared themselves religious fell from 77% to 68% – a 9% decrease between 2005 and 2011. Self-identified atheists rose by 3%.

These numbers aren’t exactly drastic given the global growth in population, but they’re certainly significant. Whilst atheism certainly doesn’t dominate the global distribution of believers and non-believers, it seems to be gaining momentum. Does that mean that religion is on the decline, though? Not necessarily – only some religions.

The Fall of Tradition

In January 1697, 20-year old Thomas Aikenhead was hung for blaspheming in an execution ground in Edinburgh. Aikenhead would become the last person to be killed for religious crimes in Britain. In 2019, it’s impossible to even conceive of the idea of a Western country so driven by faith that they would take to sentencing a young college student to death. Those days are, thankfully, long gone. 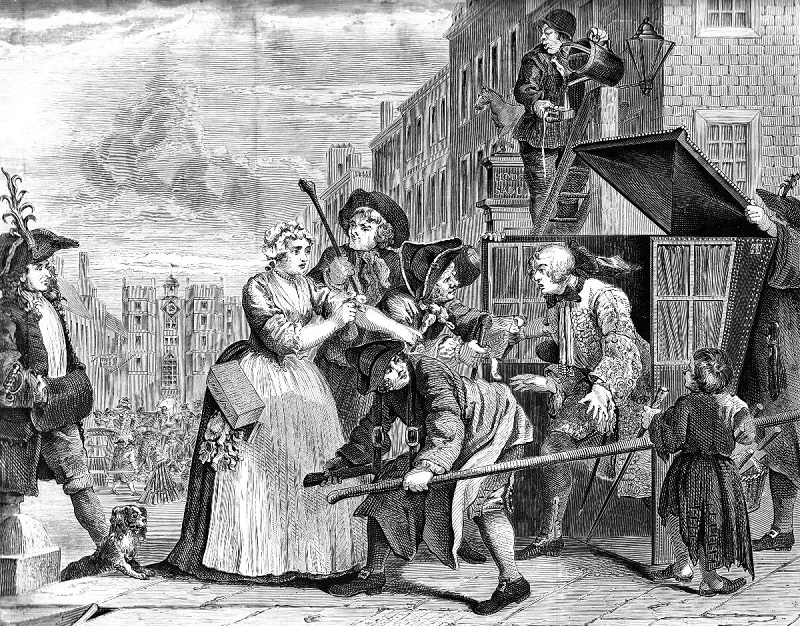 The abolition of religious executions is but one example of the modernization of traditional Christian dogma. Other such changes to tradition include the acceptance of homosexual relationships within the Church of England, the legalization of abortion in some Western countries and the ordination of women in the Anglican church.

Christianity is being forced to comply with the political and ethical movements of the modern world, and in doing so, many traditionalists have begun to move away from the church. The recent decline in Christian populations may be, in part, due to the modernization of Catholicism. If that’s the case, this isn’t necessarily an indicator that Christianity is in decline, but rather, it is becoming less traditionalist and losing orthodox members along the way.

The Rise of Pentecostalism

Even as tradition wanes, more liberal schools of Christianity appear to be gaining more and more momentum as we advance deeper into the 21st Century.

Some people even claim that Christianity is gaining more momentum than it has done in many years. “Every denomination is experiencing explosive growth within the Latino church and the immigrant church at large,” says Reverend Samuel Rodriguez.

“It’s been this way now for several decades. This is a perpetual revival if you will, and it’s not going to cease.”

Denominations such as Pentecostalism have, indeed, seen a rapid rise in numbers over recent years, too. Pentecostals believe that the Holy Spirit empowers all areas of life, offering miraculous abilities and so-called gifts.

What’s more, although Pentecostalism is less prevalent in popular culture than other denominations like Catholicism and the Church of England, it was reported to be the fastest-growing world religion in a 2005 paper.

Pentecostals, like Christians, believe in Jesus Christ and the gospels – but with a greater emphasis on the Holy Spirit. The church upholds the importance of a direct experience of the presence of God by each individual believer, suggesting that faith should be experiential rather than absorbed solely through scripture. Members of the Pentecostalist church also believe that their actions are driven directly by the power and influence of God. 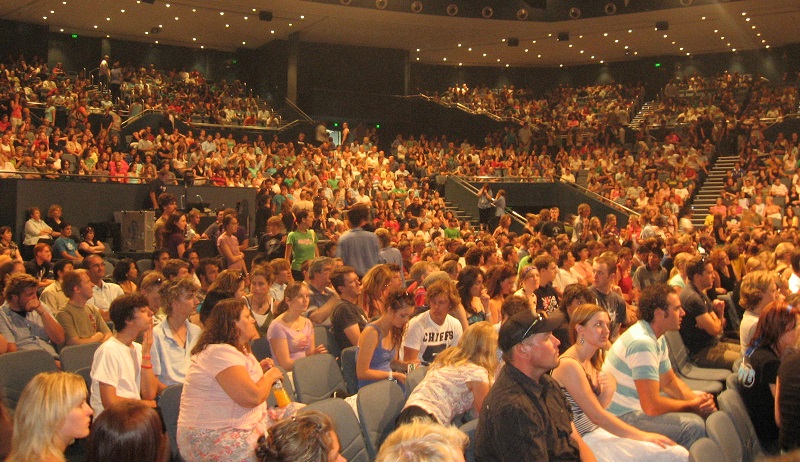 Reasons for the Growth of Pentecostalism

While one-half of the population appears to be handing in their notice against traditionalism, Pentecostalism is soaring in numbers. So what’s behind this rapid growth in a religious world so divided?

Some think it’s due to the overwhelming experiences that Pentecostal worship entails: speaking in tongues, faith healing and other profound traditions that, when experienced, usually inspire complete and unwavering religious conversion. Others think it may even be a counter-movement against the fall in the number of traditionalist churchgoers – a sort of clinging to the true message behind Scripture.

The second possibility appears to hold more ground when we consider the fact that many pentecostalists hold that their movement is an effort to return Christianity to its simplest form – that which is most aligned with the early stages of the Christian church.

Perhaps it is for this reason that Pentecostalism is growing so rapidly in popularity. It may indeed be an attempt to preserve ancient faith whilst modern denominations like Catholicism move further away from their old traditions in an attempt to modernize Christian doctrine.

Whatever the reason, one thing is clear. To state that Christianity is dying is a misguided overstatement. Christianity is a vast sea of varying beliefs. Where one denomination wanes, another usually thrives. So if Christianity isn’t dying but the plates appear to be shifting, what, then, does the future of religion hold?

The Future of Religion Worldwide

The religious profile of the world is rapidly changing, some moving to atheism from faith, others to religion from secularism, and many still undecided. Over the next four decades, the Pew Research Center predicts that Christians will remain the largest religious group on the planet but Islam will grow faster than any other major world religion.

By the year 2050, the following is set to occur if current trends continue:

The future of religion is, of course, not something that any of us can accurately predict. Pentecostalist growth in recent years isn’t an event that anybody anticipated, and there will surely be more unexpected changes to come.

Pentecostalism isn’t the only denomination on the rise, however. Let’s take a look at the growth patterns of the other key Christian schools.

The Future of Catholicism

In 2013 alone, the global population of Catholic followers was a shocking 1.25 billion, which comprised an impressive total of 18% of the global population. Interestingly, this figure represented a dramatic increase from those that were recorded in 1950, according to which around 440 million people were reported to follow Catholicism and 654 million in 1970.

Clearly, previous trends show that Catholicism has been increasing in numbers – even though some states appear to be moving towards secularism. In 2010, Catholics were reported to comprise around half of all Christians. Who knows how those numbers will change in years to come.

The Future of Islam

The Pew Research Center estimates that, in the next half-century or so, Christianity’s long reign as the world’s largest and most widely-followed religion may be set to come to an end. Muslim populations are expected to grow more than twice as fast as the overall global human population between the years of 2015 and 2060, surpassing Christians as the world’s largest religious group in the second half of the century.

The general global population is expected to grow only by 32%, whilst the number of Muslims worldwide is expected to increase by 70% from 1.7 billion to nearly 3 billion by 2060. In 2015, Muslims were reported to have made up 24.1% of the global population. Forty-five years later, they’re projected to make up more than 3 in every 10 of the world’s people, or 31.1%.

Are Christian Populations in Europe on the Decline?

2.4 billion practicing Christian believers were recording across the globe in 2012, representing an average of 1 in 3 people worldwide. Christianity is, as discussed, undoubtedly the world’s largest religion – but will this always be the case? 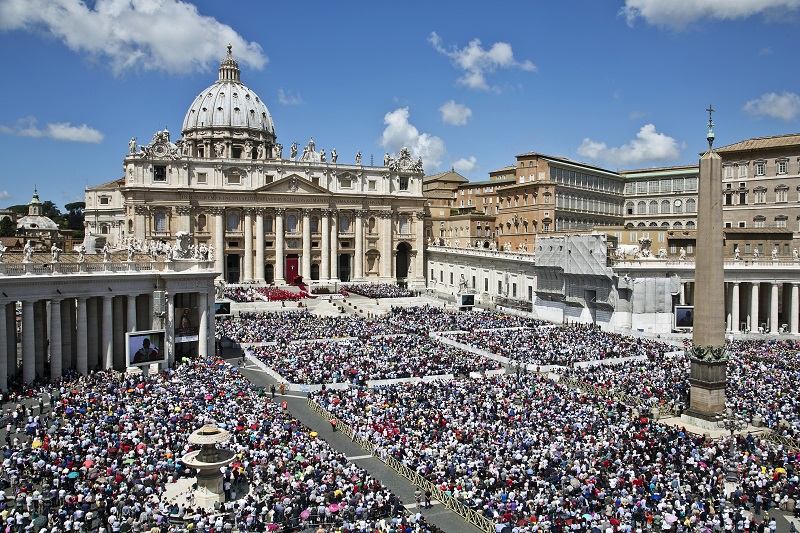 Between now and 2050, however, the regional and geographical distribution of Christian believers is predicted to undergo even further shifts. By then, Europe is predicted to house only 16% of the global Christian population by then – a fall of 10%.

These figures seem to suggest that Christianity is declining, despite its widespread global presence until now. This is, however, perhaps only a temporary trend. Christianity is still currently the religion of approximately 31% of the people on Earth, reports Pew.

Furthermore, both Latin America and Africa saw a noteworthy increase in new Christian followers in Pew’s report, but worldwide the rate of growth in Christian followers hasn’t yet matched that of Muslims. Why? Because Muslim followers have more children than all seven other major religious groups studied by Pew – an average of 2.9 children compared to 2.6 of Christians 2.2 of non-Muslims.

Another reason for this growth is that Muslims don’t tend to switch religions as much as followers of other faiths, generally remaining dedicated to Islam for their entire lives. Changing religions is expected to be the cause for further reduction in Christian growth, resulting in the migration of 72 million Christians by 2060.

Whilst the population of atheists and agnostics is still rising in the US and Europe, non-religious people tend to have fewer children, likely to be contributing to the overall decrease in numbers.

The future of Christianity is unclear. Nobody can predict what may happen, but when we look at the trends of recent years, it seems that the ancient school of faith will remain prevelant for many years to come.

Indeed, some areas of Christianity are in decline. The reasons for such falls in followers may be for any number of reasons: the shift in the distribution of religious people worldwide (Muslims overtaking Christianity as the fastest-growing religion), the abandonning of age-old Christian traditions, the rise of Western secularism and the advance of liberalist political movements.

Whilst such areas are falling in their number of followers, others are seeing a rapid boom. Pentecostalists and Protestants are surging in numbers, as is the growth of Islam. Even where some schools of faith or waning, others are thriving.

When we ask what is the future of religion, it’s difficult to provide a precise answer. All we can do is turn to previous trends and attempt to form accurate predictions. Those predictions seem to point towards the same answer: religion will remain a strong and widespread force for many centuries to come.