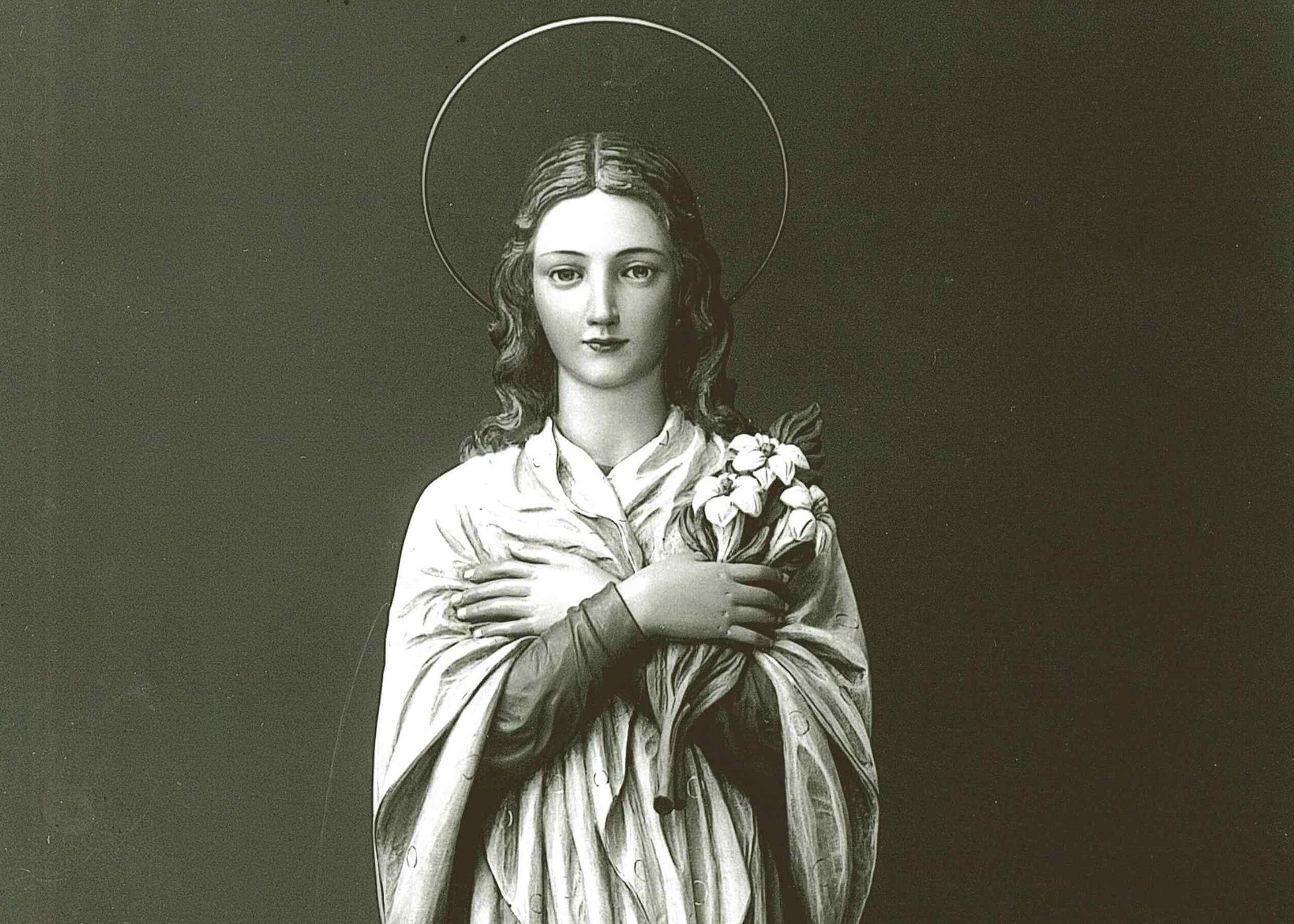 On July 6, Saint Maria Goretti, the holy child who died to preserve her innocence, is remembered. Here is how her cult was born.

Devotion to Saint Maria Goretti began immediately after her tragic death on 6 July 1902. To understand the reasons for this cult born so quickly, and addressed to a little girl daughter of peasants, who died in tragic circumstances, but also frequent, for the time, we must understand the very context in which Mary lived and died. It was precisely among the humblest strata of the population that devotion to this holy child developed, in the hearts and souls of men, women and children accustomed to suffering and hardship, belonging to the rural world, the same in which she had lived her short life.

Maria Goretti was proclaimed a saint for having forgiven her murderer and for having caused his conversion.

She is the patron saint of Latina, of Agro-Pontine, of the Daughters of Mary, and of youth, with Saint Luigi Gonzaga. She is not the only holy victim of rape, and for this reason she has been associated in recent times by Pope Benedict XVI and then by Pope Francis, to Saint Dinfna, Irish martyr who died in Belgium in the seventh century, protector of the victims of rape.

The story of Saint Maria Goretti brings us back to the many young saints in the history of Christianity. We talked about some of them in the article dedicated to Saint Luigi Gonzaga, the patron saint of the young, or in that on Joan of Arc, The young Santa Guerriera symbol of faith and courage, also just a humble peasant, who was still able to save his country. These young and very young saints and martyrs who died too early, just like Santa Maria Goretti, have an important lesson to pass on to all of us, and it is that you do not have to live a long life and mature a vast experience to bring out the best of yourself. Goodness, mercy, the spirit of sacrifice have no age, and it is these virtues that make the difference, to make us immortal in the memory of those who loved us, of those who knew us. In the same way, holiness has no age, and these special children prove it to us, they who have remained in the memory of the centuries as examples to follow and venerate.

But who was Saint Maria Goretti, and how was the devotion that was addressed to her born?

Maria Goretti was born in Corinaldo, in the province of Ancona, in the Marche, on 16 October 1890. Precarious economic conditions and lack of work forced his family to move to the countryside of Agro Pontino, 10 km from Neptune, along with the Serenelli family. Alessandro, one of the sons of the Serenelli, soon showed interest in Maria, an interest that led to increasingly insistent physical approaches. After the death of the girl’s father due to malaria, the two families get even closer, dividing the same house. It is here that Alessandro, twenty, one day attacks Maria, who is eleven years old. The child is denied, tries to escape, pleads with him, and the boy, blinded by violence, hits her fourteen times with an awl. Mary is taken to the hospital of Neptune, where she dies the following day, but her last words are of forgiveness and reconciliation for her murderer: “For Jesus’ sake I forgive him, I want him to come with me to Heaven.”

Thus Maria Goretti dies, while Alessandro Serenelli, deeply touched by the girl’s forgiveness, is locked in prison, where in the twenty-seven years that followed he will undertake a personal journey of repentance and approach to the Catholic religion. His conversion is considered the first of the miracles of the little saint. Released from prison, the man will go to implore the forgiveness of Mary’s family, obtaining that of her mother, Assunta.

The Passionist fathers of Neptune and the Roman Catholic Action immediately spread the story of Mary, who became, even in the fascist era, a symbol of virtue and courage for the local rural population.

Even after the Second World War, in the fifties, the story of the girl aroused much emotion, not only among Catholics. His example of courage and resistance became a model even for young communist militants, to the point of becoming, at the proposal of Palmiro Togliatti, a model of life for the girls of the FGCI, Italian Communist Youth Federation.

Over the years, the Congregation for the Causes of Saints examined various healings attributed to Maria Goretti. It will be in the presence of Mother of the Assumption that Mary, on June 24, 1950, will be proclaimed Saint by Pope Pius XII, in a ceremony that will take place outdoors, in St Peter’s Square, for the first time in the history of the Church. The Pope on that occasion kissed the hand of the girl’s mother, as a sign of respect for the sacrifice of her daughter, but also for her pain. Alessandro Santarelli also attended the canonization. He had told that he had seen Mary in a dream, in a beautiful garden, surrounded by flowers. He then spent the rest of his long life in a convent.

Every year there are two pilgrimages to the places of the life of Santa Maria Goretti: the last Saturday in June, and the first Saturday in July. They take place in Neptune, where his remains are kept, but also in his birthplace.

The place where Santa Maria Goretti was born is located in the district of Pregiagna, near Corinaldo. The farmhouse has remained about as then, a small building built on two floors, as you can see many in this rural area. The ground floor still shows what’s left of the barn. Where once there was the cellar was set up a small chapel dedicated to Santa Maria Goretti. On the second floor there are the rooms where the Goretti family lived, the kitchen with the fireplace, the rooms still furnished with the furniture of the time.

In 2015 the artist from Senigallia Andrea Ippoliti created for the park around the house an installation of 12 panels dedicated to the theme of love.

The house of Santa Maria Goretti is a destination for pilgrimages and visits by the faithful not only from Italy. It is about 1 km from the historic center of Corinaldo and a bus is easily reached. There is also a large car park with space for both buses and cars. In front of the house of Maria Goretti there is a Reception Centre for pilgrims, a small votive shrine dedicated to the Holy Child, a “Via Crucis”, a playground for children. A Mariana newsstand is dedicated to Assunta Goretti, Maria’s mother.

Also in Corinaldo, in the parish church of San Francesco, in the Baptistery of which Santa Maria Goretti was baptized, was placed a small monument dedicated to her, in white Carrara marble.

At the top of the historic center of Corinaldo is the Diocesan Sanctuary of Santa Maria Goretti. Here lie Mamma Assunta, who died in 1954, and Alessandro Serenelli, who died in 1970. A wooden sculpture depicting the little Saint is placed near the central altar where there is also a silver urn containing the bone of her arm.

The Canticle of the Creatures of St. Francis
St. Francis of Assisi is one of the most loved and venerated saints by the Catholic Church. Close to the poor, brother of the least…

The sanctuary of Maria Goretti in Nettuno

IThe body and relics of Santa Maria Goretti are kept in Neptune, in the Sanctuary of Our Lady of Grace and Santa Maria Goretti. According to the legend, in 1532 three statues were transported by a vessel bound for Naples, among them a statue of the Madonna coming from England where, because of the Anglican schism, the statues of the saints were destroyed. A violent storm fell on the ship, and the sailors begged Our Lady, who saved them. According to legend, the statue of the Madonna ended up on the shores of Neptune, or in another version it was donated by the sailors themselves to the inhabitants of the place.

Thus was born the cult of the Virgin of Graces, who watches over the population of Neptune protecting it from every calamity and tragedy. A sanctuary was dedicated to her, located at the end of the Giacomo Matteotti promenade, near the mouth of the Loricina river. It still houses the wooden statue of Our Lady of Grace that has come to these shores in such an adventurous way.

When Maria Goretti was beatified in 1950 her name was added to the title of Our Lady of Grace to call the sanctuary. In the crypt an altar made by Arnaldo Brandizzi contains the urn of Maria Goretti, buried here in 1929. In 1947 her remains were reassembled in a wax statue, placed in a case and exposed in the chapel dedicated to her.

Related Posts...
Saint Peter and Paul, why are they celebrated together?
Saint Benedict: the saint who inspired Italian craftsmanship